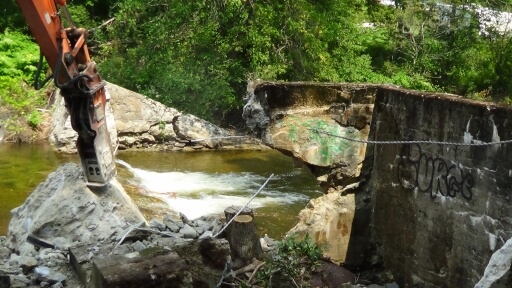 CRC’s restoration work includes improving fish passage and flood resiliency at “pinch points” in our rivers. These obstacles include old “deadbeat” dams with no useful purpose and undersized culverts, which block or hinder fish and other aquatic animals from accessing their entire watershed. Since 2011, we have opened 343 miles of habitat via 12 dam removals and 3 culvert projects.

There are 15 dams on the Connecticut River, 12 of which are hydropower projects, and over 1,000 smaller dams on its tributaries. Fish have been deeply impacted by centuries of dam building, particularly anadromous species like American shad, sea lamprey, blueback herring, alewives and Atlantic salmon that return from the ocean to spawn in our rivers. Migratory fish populations plummeted due to the construction of these structures, but have begun to rebound as a result of successful fish passage projects. CRC works with private landowners, towns, energy companies, and other owners of these structures to raise money for removal and/or replacement so that our rivers are healthier for all of us to enjoy.

Where are we working now?

Over the next few years, CRC is pursuing multiple dam removal projects in New Hampshire and Vermont, as well as several culvert replacement projects. Grant applications and funding proposals are being submitted to federal and state agencies, as well as numerous Foundations. This multi-year campaign is focused on small, head-water streams within the Connecticut River watershed where native fish are plentiful but face obstacles to moving upstream.

3 Dams Removed in 2019, restoring more than 90 miles of stream habitat

CRC worked with the dam owner, Southern Windsor County Regional Planning Commission, Vermont Agency of Natural Resources, and local contractors to remove the dam off Kidder Hill Rd. in Grafton, VT. The concrete dam, built in 1960, was heavily damaged by Tropical Storm Irene and identified by the State as a priority river restoration project eligible for State of Vermont Clean Water Block Grant funding. With the dam gone, fish and wildlife can move freely throughout the river system, and natural flows will help transport sediment downstream. CRC contracted with Fitzgerald Environmental of Colchester, VT and Canonica Farm & Forest Services of Chelsea, VT for the design and implementation of this restoration project.

Windham Regional Commission and CRC worked with landowners in Dummerston, VT to remove a dam on private property on Crosby Brook. The work was supported by a grant from the VT Department of Environmental Conservation. This project was possible due to collaborations including Vaughan-Johnson Dam owners, Paula Sagerman Historic Preservation Consultation, United States Army Corps of Engineers, US Fish and Wildlife Service, VT Division for Historic Preservation, Town of Dummerston, Ripple Natural Resources LLC, and Canonica Farm and Forest Services LLC.

The Pine Mill Dam in Haverhill, NH was CRC’s final dam removal in 2019. It was a big and complicated project because the dam was still attached to the original mill building, which is now an apartment complex. Additional work (structural, vibration monitoring, and cutting the concrete dam) were all required. This work was funded by the National Fish and Wildlife Foundation, the US Fish & Wildlife Service, and the Upper Connecticut River Mitigation & Enhancement Fund. 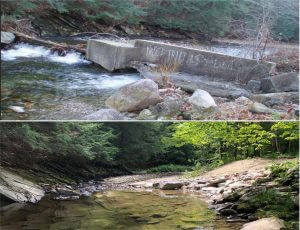 4 Dams Removed in 2018, restoring more than 75 miles of stream habitat

CRC worked with the Norwich Fire District to remove the old Norwich Reservoir dam on Charles Brown Brook in Norwich, VT. The concrete dam was built in 1928 as a water source but became obsolete in 1981. The project – which included removing the concrete dam, 758 truckloads of accumulated sediment, and in-stream habitat reconstruction – was funded by the Vermont Ecosystem Restoration Grant, the New Hampshire Charitable Foundation, Vermont Fish & Wildlife, Patagonia, Trout Unlimited, American Rivers, and the Norwich Conservation Commission. With the dam gone, native Brook trout and other aquatic wildlife can freely move throughout the entire river system from the Connecticut River to the headwaters (a total of 43 miles).

CRC partnered with the U.S. Fish & Wildlife Service (USFWS) Connecticut River Coordinator’s Office to remove a small, privately owned dam on Cold Brook in Wilmington, VT. This river restoration project was funded by USFWS’s National Fish Passage Program and their Partner’s For Fish and Wildlife Program, a Watershed grant from Vermont Fish & Wildlife, as well as grants from the Conservation Alliance and the National Fish and Wildlife Foundation.

CRC’s dam removal and river restoration work wrapped up with a dam on Clark Brook in Haverhill, NH. Crews worked through the snowy, cold fall to remove this privately owned dam. 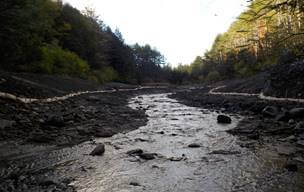 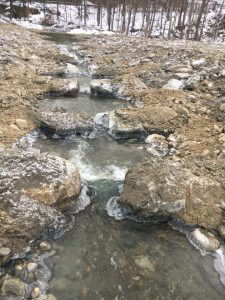 3 Dams Removed in 2017, restoring more than 120 miles of stream habitat

The Connecticut River Conservancy partnered with the Passumpsic Valley Land Trust to remove the East Burke dam on the East Branch of the Passumpsic River in East Burke, VT. The concrete dam was built in 1931 at the same location as previous timber crib dams (the first was built in 1825). A total of 623 truckloads (or nearly 9,500 cubic yards) of sediment were removed from upstream of the dam, which lowered the flood elevation level in town by four feet. With the dam gone, native brook trout and other aquatic organisms can freely move throughout the entire river system (99 miles). CRC and our project partners returned to East Burke in spring 2018 to plant 2,500 trees and shrubs along the newly shaped riverbank to add additional wildlife habitat and reduce erosion.

CRC worked with another private landowner to remove a former small hydro dam on the Ompompanoosuc River in West Fairlee, VT. This dam was originally built in 1983 to generate hydro-electric power for the farm, but only produced electricity for 10 years. Since then, the dam functioned as a blockage to both upstream aquatic organism passage and downstream movement of sediment. By removing the dam we opened 17 miles of habitat, improved water quality, and reduced water temperatures. Funding for this project came from the Upper Connecticut Mitigation and Enhancement Fund, the U.S. Fish & Wildlife Service, and a grant from the Conservation Alliance. 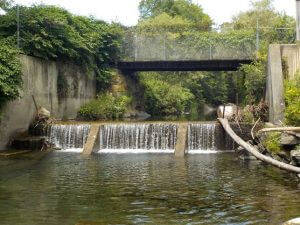 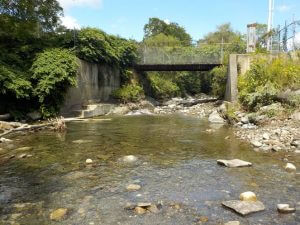 CRC worked with the Town of Haverhill and other partners in 2016 to replace two aging, undersized and perched culverts that were blocking fish passage. The projects on Page Rd. and Stonecrest Dr. open more than twenty miles of stream habitat, benefiting brook trout and other aquatic species. Replacing these culverts has also reduced the risk of flooding and infrastructure damage. Both projects were coordinated by CRC River Steward Ron Rhodes, including project oversight and contracting with Trout Unlimited and Horizons Inc. for engineering design as well as Chief Bogie Excavating for construction. CRC received grants from the New Hampshire Charitable Foundation’s Upper Connecticut River Mitigation and Enhancement Fund, the National Fish and Wildlife Foundation, the State of New Hampshire Moose Plate program

and the U.S. Fish and Wildlife Service.  Additional funding was provided by Town of Haverhill and the Greater Upper Valley chapter of Trout Unlimited via an Embrace-A-Stream grant. 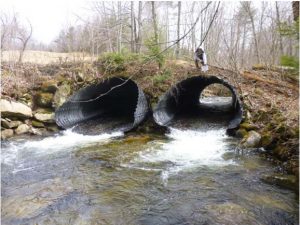 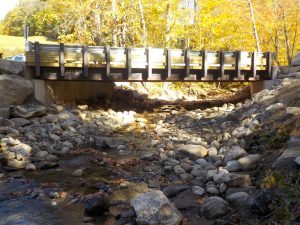 CRC and our partners removed this deadbeat dam in summer 2015. This dam was built in the early 1900’s for hydro power, but was wiped out by the 1927 flood and never used again. So, for nearly 90 years, this old dam was blocking fish passage and sediment transfer, as well as being a safety hazard for river users (fishers, paddlers and swimmers). CRC secured grant funding and private donations (including from the dam owner – Green Mountain Power), worked with the U.S. Fish & Wildlife Service on engineering, and hired a local contractor to remove nearly 600 tons of concrete, metal and debris. Fish passage was achieved immediately when one small fish found the flowing water during deconstruction, and a nice sized trout was spooked upstream during post-construction monitoring. This project opened up 34 miles of river habitat for fish.

The replacement of this culvert on Abbott Brook in Strafford, VT will improve flood resiliency and allow for fish passage into the Podunk State Wildlife Management Area (WMA). The project, completed in 2015, opens five miles of stream habitat to the WMA, benefiting brook trout and other aquatic species.

The project was coordinated by CRC, working in partnership with the Town of Strafford, Vermont Fish & Wildlife, and the U.S. Fish and Wildlife Service. In addition to the federal and state funding support, CRC received a grant from the New Hampshire Charitable Foundation’s Upper Connecticut River Mitigation and Enhancement Fund program.

Installation of a fish ladder at the dam impounding Rogers Lake removed the last barrier to one of Connecticut’s largest historic river herring runs. Work over the last decade has removed other downstream barriers which has allowed thousands of alewives to return to Mill Brook and spawn. The fish ladder, completed in 2013, opened hundreds of acres of historic habitat to alewives which is expected to dramatically increase the size of the run in this river. CRC partnered with the Town of Old Lyme and the Connecticut DEEP on this project, with funding from the National Fish & Wildlife Foundation.

This project was completed in 2012 in partnership with the Nature Conservancy, Connecticut DEEP, and the StanChem facility. This is a great project for American shad, as it will restore their whole historic 16.5 mile habitat range in the Mattabesset. It is also be a boost to migrating alewife, blueback herring and sea lamprey plus a host of other aquatic species. CRC funded and created the initial design and engineering for this structure and The Nature Conservancy finished the project up with the other partners.

The Johns River Rock Ramp was built in 2006. The dam at the site was partially removed during that work. A series of step weirs were put in place in order to assure fish passage. In October 2007, some of the boulders used to build the ramp had moved and exposed the downstream side of the dam, making it impassable to fish. Therefore, repair was needed to meet the objective of fish passage. Final work on the project was completed in 2011. CRC partnered with NH Fish & Game, Trout Unlimited, and a local citizens group. Funded with support from CRC members and New Hampshire Charitable Foundation’s Upper Connecticut River Mitigation and Enhancement Fund program.

This dam is located in the Ashuelot River immediately downstream from the historic Thompson Covered Bridge. CRC, through our NOAA River Restoration program, provided cash and encouragement to complete the dam removal. Other partners with NH DES have been the U.S. Fish and Wildlife Service, National Oceanic and Atmospheric Administration (NOAA), NH Fish & Game, Fish America Foundation, NH Corporate Wetland Restoration Partnership, U.S. Department of Agriculture’s Natural Resource Conservation Service, and the New Hampshire Chapter of The Nature Conservancy. The removal in 2010 reconnected over 27 miles of riverine habitat that will not only restore fish passage but improves aquatic habitat for a host of other aquatic species including macroinvertebrates and fresh water mussels.

The complete removal of Raymond Brook Dam, a partially-breached, 25 foot wide barrier, has reestablished the flows on this fast-moving, coldwater stream. It’s also reconnected 41 miles of high quality habitat in the Salmon River watershed, which should benefit American eels and Atlantic salmon, as well as the river’s non-migratory fish populations and a host of other aquatic species. CRC’s partners on the Raymond Brook Dam removal included American Rivers, CT DEEP, The Nature Conservancy, and NOAA (National Oceanic and Atmospheric Administration). This work was accomplished on privately held land in cooperation with the land’s owners.

In July 2007, CRC helped the Mass. Riverways Program fund the replacement of a culvert on Bronson Brook, opening up 4.5 miles of high quality, coldwater habitat on a tributary of the East Branch of the Westfield River in Massachusetts. The problem was a perched, double-box culvert at Dingle Road, severely damaged during Hurricane Floyd in 1999. This barrier was replaced with a bottomless arch culvert designed to support movement and potential habitat for Atlantic salmon spawning further upstream. It should also benefit resident coldwater species including Eastern brook trout and black nosed dace. Our partners on the project included the Town of Worthington, USDA, MA DFW, USFWS, NOAA-American Rivers, and the Westfield River Wild and Scenic Committee.

Completed in September 2007, the removal of Pinney Hollow Brook dam opened up two miles of stream habitat. CRC co-coordinated this project in partnership with the Vermont Dams Task Force and others.