For your safety, we are not seeking volunteer assistance at this time. Check back for updates.

If you require additional accommodations or have questions about registration, please call us at 413.772.2020 x207 or email volunteer@ctriver.org. 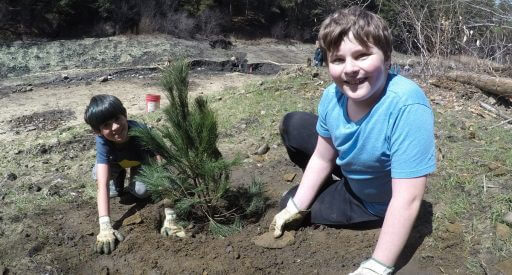 Riverbanks with native trees, shrubs and flowers are the most cost-effective restoration projects we can implement in the Connecticut River watershed. Restoring riverbank trees and shrubs, which were cut and removed over the years, is an important step toward improved water cleanliness, more stable riverbanks, and better fish & wildlife habitat for our rivers. CRC has secured funding to plant native trees and shrubs along the banks of the Connecticut River and its tributaries in order to filter polluted runoff and provide a buffer zone between our streams and land use. 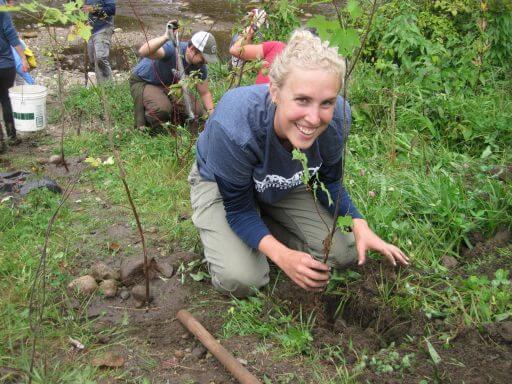 In 2018, CRC and a multitude of project partners planted 6,536 native trees and shrubs on 8,075 feet of riverfront at 15 sites in New Hampshire, and Vermont. The riverside plantings covered eight acres of land on numerous tributaries of the Connecticut River. Many thanks to our volunteers from Trout Unlimited, the Burke Town School, Saint Michael’s College, the U.S. Fish & Wildlife Service, and the Passumpsic Valley Land Trust that joined the planting crews from Northwoods Stewardship Center, Beck Pond LLC, and ECO AmeriCorps. Funding for these plantings was provided by the National Fish & Wildlife Foundation, the USDA Natural Resource Conservation Service, the New Hampshire Charitable Foundation, Trout Unlimited (MadDog and Greater Upper Valley chapters), the U.S. Fish & Wildlife Service’s Conte Wildlife Refuge, a State of Vermont Ecosystem Restoration Grant, and a new partnership with another non-profit organization – One Tree Planted – which raises money from corporate donors around the world to plants trees. CRC hosted NIKIN, a Swiss fashion label, who donated money and helped plant one of the sites in Vermont.

In 2017, CRC, our partners, and volunteers planted a total of 7,315 native trees and shrubs along the Connecticut River and its tributaries – including the Black and Wells Rivers in Vermont, and the Ammonoosuc, Upper Ammonoosuc, and Israel Rivers, as well as Bissell Brook and Oliverian Stream in New Hampshire. These plantings – which provide important habitat for fish and wildlife, help reduce erosion, and improve water quality – covered nearly 13,400 feet of riverbank owned by 11 separate landowners. Funding for these plantings was provided by grants from the New Hampshire Charitable Foundation, the National Fish & Wildlife Foundation, the Block Foundation, and from the USDA Natural Resources Conservation Service.

In 2015, 3,000 additional native trees and shrubs from local nurseries were planted on the banks of many tributary rivers & streams. Along the Chickley River in Massachusetts, which was devastated by Tropical Storm Irene, several hundred new trees will help protect the banks and property in future floods. The work, under contract to Mass DEP, was performed by land owners and residents of Hawley, volunteers from Trout Unlimited, with in-kind donations from local businesses. Along six tributaries in Vermont and New Hampshire, over 2,000 plantings were done by volunteers from a wide variety of partner organizations:  conservation commissions, schools, golf courses, river watchdogs, kids groups, government agencies and Trout Unlimited.

In 2014, a total of 1,931 native trees and shrubs were planted. This includes 1,300 plants along the Ottauquechee River in Woodstock, VT to help restore the Billings Farm riverbank that was destroyed during Tropical Storm Irene in 2011, as well as 331 plants along Mink Brook in Etna, NH and 300 plants in Piermont, NH and Groton, VT. In addition, we added vegetation by digging trenches atop the riverbanks, installing bundles of live willow and dogwood cuttings (called fascines), and backfilling the trenches so the cuttings can root, grow and create a thick wall of vegetation that will help stabilize these highly erodible areas.

In 2013, we planted 3,025 native trees and shrubs in New Hampshire and Vermont with the help of our project partners. These plantings took place on the Passumpsic, Wells, Ottauquechee and Black rivers in Vermont, as well as on Eastman and Oliverian brooks and the main stem of the Connecticut River in New Hampshire. Several of these locations (Wells, Ottauquechee and Eastman) also received 535 stems in 2012 through our work and the efforts of our project partners.

In 2012, we partnered with New England Public Radio for a special campaign designed to help with replanting efforts throughout the Connecticut River watershed after the devastation from Tropical Storm Irene. Working together, we mobilized organizations and volunteers to plant 2,600 trees throughout the Connecticut River Valley. A group of generous partners & supporters came together to help with this special campaign. For each contribution made in support of New England Public Radio during the station’s winter on-air fund drive, a tree was planted in the watershed. 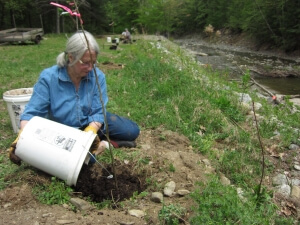 Why Trees are Important

In addition to being oxygen-producers, trees provide a range of other important benefits to rivers, people and animals in our watershed, including:

Thank you to all our partners and supporters for making these tree planting projects possible!