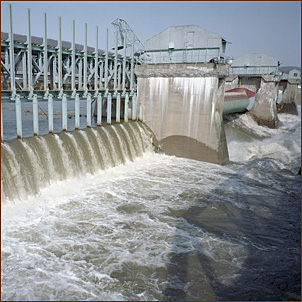 CRC is a leading river advocate in the Federal Energy Regulatory Commission (FERC) process to regulate hydropower facilities in the Connecticut River basin. In exchange for the privilege of damming our rivers, a private hydropower operator must provide direct benefits to the public and the river. These benefits may include recreational facilities, better fish passage and reducing damage to healthy river habitats. CRC has, since our founding in 1952, worked to see that hydro projects meet the federal and state laws that require a balancing of public good and private interests.

Get the latest updates

Hydropower licenses are issued for a 30-50 year duration, so they lock-in minimum flow requirements, impoundment levels, fish passage and operating regimes for generations to come. Therefore, being an advocate for the river during relicensing is critical, and we begin our homework years in advance. Working with other river guardians, we examine the impacts of each facility’s operations on different resources. Our formal comments offer our own proposals to ensure balance between hydro operations and protections/improvements for the river. We use solid scientific and technical information to negotiate the best deal for our rivers. Our presence makes a difference.

There are dozens of FERC-regulated hydropower projects on the mainstem Connecticut River and its tributaries. Some dams are quite large, producing thousands of megawatts of electricity. Their individual and cumulative river impacts are also huge. These dams affect flows and water levels from the headwaters region, 410 miles from Long Island Sound, to the Holyoke Dam, 86 miles from the Sound. Hydro dams run our appliances, but dams disconnect rivers and block the movement of migratory and resident fish and other aquatic animals. They create reservoirs where people boat and swim but reservoirs warm rivers, impede natural river flows and accumulate sediment, burying important river bottom habitat. 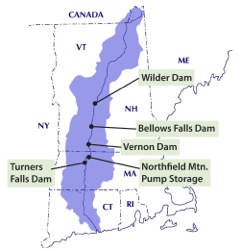 Beginning in the fall of 2012, FERC began the relicensing process for five hydroelectric facilities in northern MA and southern VT that produce over 30% of hydropower generation in New England. Together they affect more than 175 miles of the Connecticut River. FERC last issued licenses for these facilities between the late 1960s and 1980s, and all were originally due to expire in April, 2018.

The five hydro projects include dams at Wilder, Bellows Falls and Vernon in VT, owned by Great River Hydro (formerly TransCanada), which also owns the Fifteen Miles Falls hydropower facilities in northern Vermont/New Hampshire and additional facilities on the Deerfield River. Great River Hydro is a subsidiary of ArcLight Capital Partners, a private equity firm based in Boston.  The MA facilities up for renewal are the Turners Falls Dam and the Northfield Mountain Pumped Storage Project, owned by FirstLight Power Resources, a subsidiary of H2O Power LP, which is largely owned by PSP Investments, one of Canada’s largest pension investment managers.

A crucial step at the beginning of the relicensing process is getting good information on how the operation of these five facilities impact wildlife, recreation, historical and cultural resources, and clean water. In 2013, CRC and stakeholders submitted study requests and reviewed and commented on study plans. As a result, Great River Hydro and FirstLight were required to complete 71 studies to help inform all stakeholders how these facilities impact our river.

Between 2014 and 2017, CRC reviewed and commented on study reports as they came out on a rolling basis. See our blog for comment letters. In some cases, we hired consultants to help with our reviews. The closure of Vermont Yankee nuclear plant at the end of 2014 delayed the fisheries studies. Other delays on top of that meant that Great River Hydro received a 1-year extension on their license expiration. Both companies were required to file license applications in advance of completing all the studies.

Since the middle of 2017, FirstLight has convened settlement discussions, which CRC is participating in along with other stakeholders. At some point, FERC will also issue a new process plan for the post-license application phase of relicensing. The beginning steps for that will be a revised final license application and a moment when parties can intervene and provide recommended license terms.

CRC river stewards Andrea Donlon (MA) and Kathy Urffer (VT/NH) are participating in all the formal proceedings. They review reports, prepare CRC comments, and are working to engage the public in the process. Get in touch if you would like to participate!

This project is funded in part by a grant from the New Hampshire Charitable Foundation.

Bear Swamp Pumped Storage Facility and Fife Brook Dam are located on the Deerfield River in MA and are owned by Brookfield Power. This license expires in 2020 and the relicensing process began in 2015. CRC has been actively involved in reviewing all relicensing documents and providing comments as a stakeholder organization.

The Great Falls hydro station on the Passumpsic River in Lyndonville, VT is completing its relicensing process. A final application was submitted and the company is now responding to FERC requests for additional information. FERC has issued a Scoping document on the project.

We continue to observe the hydroelectric modifications at the flood control dams on the West River at Townshend and Jamaica, VT for license compliance.

Past Work to Improve Hydropower

The 15-Mile Falls Project is a series of dams near Littleton, NH — the Moore, Comerford and McIndoes Falls dams, currently owned by Great River Hydro. These impoundments represent the largest single hydroelectric generating complex of dams in New England, affecting levels and flows from the Connecticut Lakes to the dam at Wilder, VT. CRC is a signatory to the 2001 landmark agreement guaranteeing increased river flows. The agreement established permanent easement protection on 9,200 watershed acres and created a $15 million Mitigation and Enhancement Fund. CRC continues to monitor license conditions and the workings of the M&E Fund.

The Holyoke Dam is the lowermost dam on the Connecticut River, controlling migratory fish access to 85% of the spawning habitat in the Connecticut River basin for American shad, blueback herring, shortnose sturgeon, and other species. In 1999, CRC helped win increased habitat flows in the bypass reach below Holyoke Dam as well as improvements in fish passage and the 401 Water Quality Certificate in the new license. Post-relicensing work has kept us busy for more than a decade. Years of studies, designs, and meetings with Holyoke Gas & Electric finally led to the construction of upstream and downstream passage for shortnose sturgeon in 2015-2016. As a party to the settlement agreement, CRC reviews and comments on migratory fish passage reports and other studies that are released on an annual basis.

The Canaan Dam is located in Stewartstown, NH and Canaan, VT. This 275 foot-long dam and hydro facility backs-up a 4,000 foot pond on the Connecticut River. During the 2009 relicensing, CRC and Trout Unlimited successfully requested that Vermont include a condition in their 401 Water Quality Certificate that the dam owner would need to install fish passage at the request of the state. Although appealed by the dam owner to the VT Environmental Court, the condition remains in the VT 401 Certification and thereby is a condition of the FERC license.