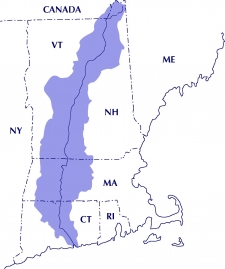 THE CONNECTICUT & ITS TRIBUTARIES

The Connecticut, New England’s longest river, stretches for 410 miles from a small pond  on a spruce-fir ridge at the northern tip of New Hampshire on the Quebec border to the beaches and marshes of Long Island Sound.  Its watershed drains some 11,000 square miles of rural, wild, and urban land.  Two countries share a border at its northern edge, and four states are inextricably linked by this network of earth, river and sea.  All share in the rich heritage of the Connecticut—the “long tidal river” named by the Algonquians of southern New England.  The Connecticut is just one of fourteen rivers in the nation designated as an American Heritage River.  The US Department of Interior named it America’s first “Blueway” in 2012.

The Course of the CT River

THE COURSE OF THE CT RIVER

The Connecticut River’s source is an evergreen divide that forms part of the US/Canada border in northernmost New Hampshire.

From there it flows south between the White and Green Mountains, connecting Vermont and New Hampshire in its bounty.  As it courses seaward New England’s Great River washes past two Springfields, a Pittsburg, two Hartfords, and a Haddam.

Early on it burbles over Moose Falls, moves into lazy, oxbow loops near Guildhall, VT, and pushes over a series of dams and the buried cataracts known as Fifteen Mile Falls.  It then rumbles past Charlestown and churns through Bellows Falls, before tumbling down the face of Vernon dam and pushing past the ancient ledges of the French King Gorge.

The River rolls on from there, over Turners Falls, then through the water gap separating the Mt. Tom and Holyoke Ranges.  In its namesake state, the Connecticut froths through the Enfield Rapids; then chugs past a Victorian opera house, then boils up into wake-water behind one of one of the nation’s oldest ferry runs.  Finally, New England’s Great River rolls, flattens, and gently spills its freshwater in with the sparkling tides at Long Island Sound, just in the shadow of historic Saybrook Lighthouse.

From its bedrock, to its wildlife and people, the Connecticut River watershed harbors a huge chunk of North American natural history and culture.  It is the living artery of western New England.  Human habitation first occurred here over 12,000 years ago when Paleo-Indians arrived from the west.  Later more permanent settlements occurred and a local agriculture developed, evolving on the river’s fertile bottomlands.  Corn has been cultivated in the Connecticut Valley for over 1,000 years, a priceless legacy from the watershed’s Algonquian settlers.

In the early 17th century waves of immigrant settlers arrived from across the Atlantic.  They felled the forests and turned swaths of Valley terrain into fields and farms, giving new European names to ancient landmarks and new settlements.  Later still, Africans, Asians, Eastern Europeans, and Central and South Americans made the Connecticut River Valley home–adding to the cultural mix and history of this great basin.

The Valley is home to a host of universities, colleges, museums, and cultural facilities. These include: the University of Massachusetts, Smith, Mount Holyoke, Amherst, Trinity, Dartmouth and Wesleyan colleges; the Connecticut River Museum, the Science Center of Connecticut (Hartford), and Springfield Science Museum, the Montshire Museum, the Goodspeed Opera House, and the Basketball and Volleyball Halls of Fame.

From Paleolithic times to today, humans have depended on the Connecticut River watershed.  Over 2.3 million people do at present.  Interactions with the Connecticut and its tributaries have ranged from the sustainably benign, to detrimental in the extreme.  In general, more people have equaled more impact on river environments.  The Connecticut is one of New England’s earliest developed rivers by Europeans.  Hartford, CT and Springfield, MA were both settled in the 1630s.  The early European history of the Valley can still be seen at the Griswold Inn (1776) in Essex, CT, the Wadsworth Athenaeum (1842) in Hartford, CT, Historic Deerfield (1717-1824) in Deerfield, MA, the Cornish, NH-Windsor, VT Bridge (1866, the longest covered bridge in the U.S.), and Bullfinch Row (1773-1839), seven Federal and Greek Revival houses in Orford, NH.

Those 17th century European settlements and their attendant massive timbering and new farms led to great upheaval in watershed habitats.  In less then two centuries a landscape that was 80% forested, was transformed into a patchwork-terrain of small woodlots, fields and fences.  Trees covered just 20% of the territory.

By the 18th century the Connecticut River Valley’s farms and rich soils were feeding New England residents near and far.  But the resulting deforestation and erosion—coupled with the building of main stem and tributary dams, signaled more major challenges to the river’s biological integrity. The further damming of rivers during the Industrial Revolution of the 19th century brought prosperity and cities to the Connecticut Valley, but it also blocked surviving fish runs and fouled rivers with pollutants and untreated human waste.

The Industrial Revolution flowered in the Valley, nourished by water power, prosperous, stable communities, and good old “Yankee ingenuity.” Precision engineering originated here, evidenced today by the Springfield Armory, the Colt firearms factory at Hartford, CT and the American Precision Museum at Windsor, VT. Holyoke, MA was one of the first planned industrial communities in the U.S., utilizing three levels of canals (1849-91) to deliver waterpower from the Holyoke Dam to industrial mills in the city.

Those factory-rich, tree-scarce times continued into the 20th century.  But then, just as the woods were growing back at the end of World War II, a new mix of chemical pollutants became the modern-age legacy of industry and agriculture.  Insecticides, herbicides, dyes and DDT washed down from factories and farms, entering rivers and the food chain.  By the 1950’s the beautiful Connecticut was being described as the “world’s best landscaped sewer.”  Things had to change.  And they did.

Federal legislation in the late 1960’s and early 70’s hailed the advent of the Clean Water Act, the Endangered Species Act, and brought new legislation to restore migratory fish runs.  Through the advocacy work of the Watershed Council and a host of allies–plus new and enforceable laws, the Connecticut and its tributaries grew steadily cleaner.  Ancient and withering runs of shad and herring made remarkable comebacks where working fish passage was created at main stem dams.  The bald eagle, a symbol synonymous with clean rivers, returned to nest on the Connecticut in 1989, for the first time in nearly a century.

In 1990 the U.S. Fish and Wildlife Service opened its Conte Anadromous Fish Research Center at Turners Falls, MA.  Sixty thousand American shad swam through the Turners Falls Fishways toward Vermont and New Hampshire waters the following year.  In 1995 the entire Connecticut River watershed became the nation’s newest wildlife refuge.  The Silvio O. Conte National Fish and Wildlife Refuge was based on a new concept, cooperation.  It emphasized a watershed approach to landscape preservation through conservation partnerships and limiting the use of outright land purchases to preserve habitats.  In 1998 the Connecticut was named an American Heritage River, one of just fourteen rivers receiving the designation nationwide.

This great river basin has taken us far and nourished many lives.  At times we have abused it; then helped it recover lost ground.  The Watershed Council has been the basin-wide advocate for the Connecticut River and the people who care about it since 1952.  We’ve supported and presided over many battles, and many victories: pollution abatement, dam removal, wetland protection, migratory fisheries habitat restoration, corporate exploitation.  Some victories are permanent; other battles must be fought again and again. Challenges remain.

Today, population and development pressures continue against a backdrop of climate change.  Rare species struggle in the face of ill-placed construction.  Nineteenth century sewage treatment remains the norm in some of our cities–chemicals and untreated human waste continue to pour into rivers.  Even in the twenty-first century companies are dumping unduly-warmed effluent and pollutants into the Connecticut to maximize profits; while others concoct schemes to sell off the basin’s precious, clean water for short-term gain.  Stored nuclear fuel at a riverside plant poses questions that as yet remain unanswered.  Non-point source pollution from farms and other operations degrades water quality.  Poorly-stabilized river and stream banks foul downstream habitats with silt.  Miles and miles of new pavement and parking lots rob groundwater “reservoirs” of their filtering and recharge capacities. 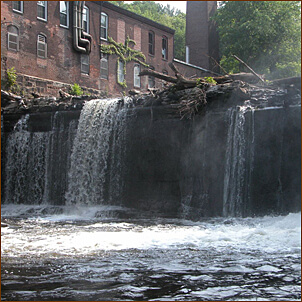 Dams, big and small—many of them obsolete, remain impassable barriers to the Connecticut River’s migratory fish and a host of aquatic species that require both upstream and downstream habitat access to successfully complete complex life cycles.  Fish passage and migratory populations on the main stem river are again in decline.  Poor oversight and failing fish passage facilities are two controllable factors that need to be addressed.  Want to get a free book about restoring fish passage on your property?  Visit our store.